Shakespeare® is working hard to help you #fishthroughit. We are operating our distribution center in compliance with enhanced safety procedures for our team and within new government regulations where we operate. This may delay some deliveries, but we are committed to fulfilling your orders as quickly as possible.

On Orders Over $50
Cart 0 View Cart
Close
Your cart is empty. Add some Shakespeare gear and hit the water! 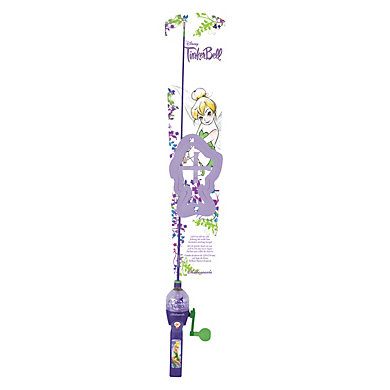 Due to increased demand and in light of the current circumstances, this product is not currently available. Shakespeare® is committed to helping you #fishthroughit and we anticipate this product will be available again by June 13th. In the meantime, we recommend purchasing from one of our trusted partners.

Follow the Pixie dust to Pixie Hollow where you can join Tinker Bell and her friends in Fairy games. With a Shakespeare lighted fishing kit your little angler is sure to enjoy their time on the water.
Shakespeare® Disney® Fairies Lighted Kit
Use filters to find the right model
Clear Filters

Shakespeare Disney Fairies Lighted Kit is rated 1.0 out of 5 by 2.
Rated 1 out of 5 by Parent of young anglers from Disappointed in this NEW and UN-improved version I bought this NEW version for our second child with hopes that it would be even better than the previous model that our first child has (and we LOVE). What a disappointment! All the features that were changed in this NEW model make it more difficult for young anglers! The casting button and reel handle are very hard for toddlers in this NEW version, whereas the previous version had no issues. I even had my older child (preschooler) compare the models and she could hardly operate them on the NEW model either... I even struggled as a parent! My advice is to purchase the previous version - I wish I had!!
Rated 1 out of 5 by Keira from Awful Awful! Bought for my daughter. Won't lock so line keeps getting released, after using it once it stopped lighting up.